SEAT Ireland, official car partner to Munster Rugby, presented their all new 2014 range to the Munster squad in Musgrave Park, Cork today. Stars of the famed rugby province including coach Rob Penney and player BJ Botha picked up keys to a host of new SEAT models including the all new SEAT Leon Sports Tourer. 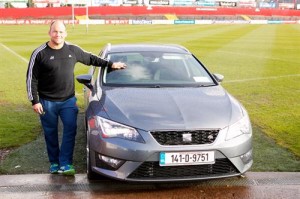 This commitment to Munster Rugby follows on from a three year deal announced last August which saw SEAT become the official car partner to Munster. SEAT is already heavily involved with Munster Rugby as title sponsor of the Munster Schools Senior and Junior Cups which were both launched last month.

Cian O’Brien, Director of SEAT Ireland commented; “Our partnership and association with Munster Rugby is something we are very proud of and it gives us real pleasure to present our 2014 range to Munster here today.”

“This partnership co-insides with a fantastic period for SEAT with the brand achieving record sales figures and market share in 2013. We are continuously introducing exciting new products such as the SEAT Leon Sports Tourer which is on display today while we look forward to unveiling the all new SEAT Leon Cupra next month.”

The car partnership deal with Munster Rugby is a highly visible sponsorship for SEAT and exposes them to Munster’s loyal support base and followers all over Ireland.  SEAT has permanent car displays in Thomond Park as well as pitch signage while SEAT has enjoyed a strong presence at key Munster Heineken Cup fixtures at Thomond Park this season.